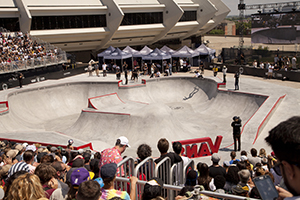 The Olympic Park Esplanade has just opened a brand new sports facility: the Vans Skatepark. This international-caliber skatepark is located in the 900 section of the Esplanade, near Sherbrooke street, and is the first such permanent facility to be installed at an existing Olympic site.

The 900 m2 concrete dome skatepark recently hosted the Vans Park Series, bringing some of the best men and women skateboarders in the world together for a weekend. This new installation was created by Vans in collaboration with the California Skateparks company, which has designed hundreds of such parks around the world. The Stadium’s Vans Skatepark is one of the best places in Canada for skateboarders to practice their sport.

How to get here

Public transport
A 5-minute walk from Viau metro station (green line) as well as stops for busses 34, 125 and 439.