The story of the Olympic Park construction is absolutely fascinating. From the groundbreaking to the addition of the Saputo Stadium in 2008 and the Rio Tinto Alcan Planetarium in 2013, here are some great moments of this fabulous adventure!

On December 4th, 1969, Jean Drapeau, the mayor of Montreal, dreams big for the Quebec metropolis: he officially presents Montreal’s candidature for the XXIst Olympiad in 1976. The following May 12th, the International Olympic Committee (IOC) announces that the City of Montreal will be organizing the 1976 games. 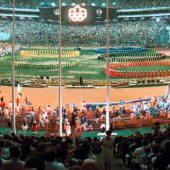 The Games are announced during the opening ceremony, the scale of the facilities, impact of Olympics Games and data.

Medals and other data

Medals chart and other data about the 1976 Olympics Games.