The Games are announced during the opening ceremony 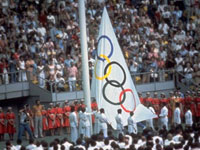 In 1970, in Amsterdam, 3 cities were on the list, and each one, in spite of courteous exchanges, intended to win out over the other 2. Between the time they submitted their candidacies and the time the decision was made by the International Olympic Committee (IOC), as was the custom, there was a period that could easily have been called the “great seduction campaign”. Each candidate used all of its resources to rally IOC votes.

The fact that Montréal was awarded the 1976 Games over cities representing the 2 super-powers is remarkable. In fact, very few experienced Olympic observers gave it the least chance. However, they did not count on the energy and tenacity of Mayor Jean Drapeau and his team.

News that the Games were granted to Montréal came from Amsterdam on May 12, 1970, and was received with great joy. The Organizing Committee for the Olympic Games (OCOG) took shape, and problems arose immediately. It was the beginning of a great adventure…

Montréal, Saturday, July 17, 3:00 p.m., royal trumpets rang out and, in the Olympic Stadium, decked in the colours of 132 IOC member nations, the announcer’s voice was heard:

“Ladies and gentlemen, Her Majesty the Queen.” Television viewers on 5 continents saw the 76,433 people gathered at the Olympic Stadium applaud the entry of Her Majesty Queen Elisabeth II, accompanied by Prince Phillip, Duke of Edinburgh, and Prince Andrew. Lord Killanin and His Excellency Roger Rousseau, IOC President and General Commissioner of the Games of the XXI Olympiad, escorted Her Majesty to the royal box, where she was greeted by dignitaries. 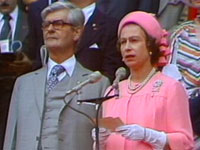 To the sounds of the Athletes March, the 94 delegations walked by at 120 steps per minute. As expected, the arrival of the host country’s delegation was one of the most touching moments of the march, which included close to 8,200 participants. At 4:34 p.m., the athletes, crowd and countless television viewers on 5 continents heard Her Majesty the Queen pronounce the ritual words of the Olympics: “I proclaim the Games of Montréal, celebrating the XXI Olympiad of the modern era, to be open.” With the Olympic Hymn by Spirou Samara playing, 8 athletes entered the Stadium bearing the white Flag with the 5 interwoven rings – blue, yellow, black, green and red. All heads turned toward the Olympic Flag as the announcer proclaimed, “Mr. Georges Kronawitter, Mayor of Munich, will hand over to Lord Killanin, President of the International Olympic Committee, the official Flag offered by the Belgian Olympic Committee to the Olympic Movement in 1920. Lord Killanin will pass the Flag to the Mayor of Montréal, Mr. Jean Drapeau.” 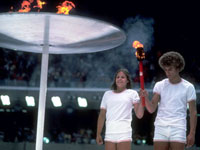 As the pigeons flew in the bright blue skies overhead, the Olympic Bells announced the arrival of the Flame. Two Canadian athletes, Sandra Henderson of Toronto and Stéphane Préfontaine of Montréal, carried the Flame to the tremendous applause of the athletes and crowd. A first in the history of the modern Olympic games! These young athletes symbolized both the nation’s founders.

The flag-bearers of the 94 national teams formed a semi-circle behind the dais, which the Canadian flag-bearer mounted, and then stood with an athlete from the Canadian delegation and a judge.

Facing Her Majesty, weightlifter Pierre Saint-Jean, bareheaded, holding a corner of the flag with his left hand, lifted his right hand, and in French and English, swore the Olympic Oath: “In the name of all competitors, I promise that we shall take part in these Olympic Games, respecting and abiding by the rules which govern them, in the true spirit of sportsmanship, for the glory of sport and the honour of our teams.”

The athlete then stepped back, and Judge Maurice Forget came forward to say the Judges and Officials Oath: “In the name of all the judges and officials, I promise that we shall officiate in the Olympic Games with complete impartiality, respecting and abiding by the rules which govern them, in the true spirit of sportsmanship.”

The Olympic ensemble, choir and orchestra, played the national anthem, O Canada. The Games of the XXI Olympiad were open.

A shiver of pride and a great feeling of admiration passed through the audience and dispelled the anxiety of a long held uncertainty. 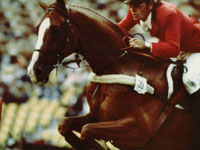 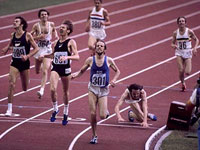 The program’s 196 events led to 198 medal ceremonies, since Olympic tradition has it that the entire team be awarded medals in the modern pentathlon and equestrian competitions.

Scale of the facilities 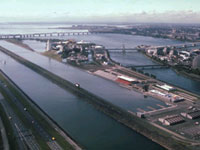 Eager to use existing structures as much as possible to hold the Games, the OCOG chose various sports centres, stadiums, pools, fields, gymnasiums and buildings in the Montréal network of urban communities for competitions, training, as well as various services, such as administration and telecommunications.

The majority of the selected locations are within ten kilometres of the Olympic Park. The COJO renovates, transforms ,and if necessary, and according to the requirements of the various sporting federations and the needs for modern technology, installs the equipment there.

At the heart of the Olympic City, a unique sports complex emerged: the Olympic Park. It dominated all other competition locations, both by the size of its installations and by the importance of the events that were held there. Almost one third of the finals took place at the Olympic Park.

The Olympic Park also stood out due to its harmonization of grounds and buildings, integrating the Stadium, pool, Velodrome, fields, metro stations, promenades and 2 existing buildings: the Pierre-Charbonneau Centre and the Maurice-Richard Arena.

The Olympic Village, at the Northern extremity of the Olympic City, was integrated into a landscape of trails that turned it into a veritable garden city.

It consisted of 2 buildings, 19 storeys each, in the shape of a pyramid, offering 980 apartments surrounded by balconies. All the athletes were housed there, except those participating in equestrian sports and sailing. They lived in residences set up in Bromont and Kingston.

Outside Montréal, Olympic competitions took place in 8 cities, where the existing installations were developed or adapted, as required. For shooting, the OCOG chose a private hunting and fishing club in L’Acadie, 45 kilometres from the city.

The impact of the Olympic Games 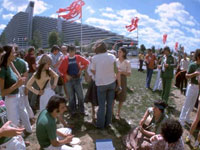 Shortly after the closing ceremony, a daily Montreal newspaper’s headline read: “Quebecers adored the Games!” In Canada, the satisfaction index of television viewers reached 96%, astonishing for even the most optimistic. Nothing could have predicted such success.

Through the universal aspect of the meeting, through the direct and simple language of the sporting events, the Game’s allure and seemed to offer to an anxious world a reassuring reality.

Despite the troubled times that preceded the Games, and the political strife that coincided with them, the Montréal Olympics still fulfilled their “mission”. Among other things, they had an effect on the young at a time when emulation, competition and life values seemed threatened by a consumer society.

The reaction of the young showed that these Games met a need and still struck a chord with the public. “In 15 days,” said the director of a Canadian federation, “the Olympic Games did what amateur sports organizations have tried to do for 10 years.” Some sports, barely known, were literally taken by storm, such as gymnastics, volleyball and weightlifting.

The success of the Olympic Games in Montréal was therefore also measured by the practice and accessibility of sports in a society more interestedin televised competition than active participation.

The organization of the Games also led to an important boost to the tourism industry of Canada in general, Quebec and Montreal in particular.

To learn more about the Montréal Olympic Games, visit the Olympic Movement site.